Spoleto, UNESCO world heritage celebrated by artists all over the world! 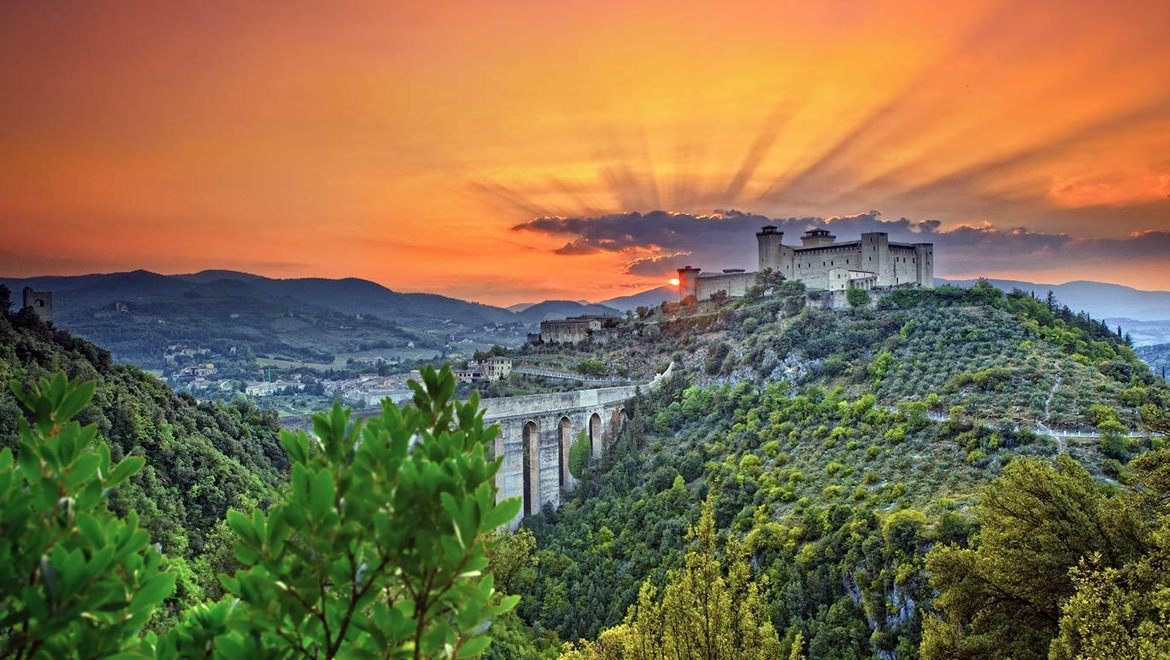 Spoleto is a beautiful umbrian city in the province of Perugia and it counts more or less 39.000 inhabitants. Its charm comes from its landscape, history full of events and characters and the beautiful monuments that boasts.

Spoleto is located at 400 metres of altitude on the slopes of Saint Elia hill and dominates the landscape of the valley. On its back, we can find the “evergreen” Monteluco: along its slopes covered by holm oaks, lived the first hermits. Today the mount is a place of peace and lonliness: it hosts religious buildings and hermitage of historical and artistic interest. Spoleto was defended by the “cyclopean wall” built in the pre-roman era by the Umbrian and the Pelasgian with limestone bricks.

This peculiarity is already present next to the fortress. The city was a roman colony and municipality and still today, it retains precious monuments of this period. The hole was in the actual square of the Market from which they were branched: “the maximum Decumanus” (Municipity street, Market street and Plinio the young street) and the thistle (urban section of Flaminia street in the past) today is Duso arc street and Palace of the Dukes street) In this area, we can find the traces of the period: the Roman house, the amphitheatre, the Domus under the Municipity, the Saint Ansano temple, the bridge of Sanguinario and the arcs of Monterone, Duso and Germanico. The lombardic period too, leaved some traces, but the biggest ones has been signed during the medieval period; when the city has been rebuilt after having been destroyed by Frederick Barbarossa.

After the first roman churches (Saint Salvatore, Saint Paolo “inter vineas”, Saint Eufemia, the cathedral of Saint Gregorio the Greater) they constructed other ones in and outside the walls. From the second half of the XIII century there has been an urban awakening which leds Spoleto to the actual comformation. The market square hosts the City hall. With the arrival of the mendicant orders, new churches have been reconstructured in the ancient city walls. The second and actual citywall, is dated 1296 and it is equipped with doors and guard towers. The second half of 1300, is marked by the construction of the fortress, papal seat and the Avignon captivity. Behind it, we can find the Towers bridge which combines the Saint Elia hill and Monteluco. During the Renaissance and the Baroque era, fantastic noble palaces have been buit, and they are combined with the urban medieval structure. The palace of Collicola among these, hosts the modern art civic Gallery. In the same period the big church of Saint Maria the golden godsent, the church of Saint Filippo and the theatre Caio Melisso have been built.

Spoleto is aimed by tourists nowadays as in 1700/’800, in this period, important tourists like Goethe fell in love with it, infact he has been inspired by the Towers bridge in his work “Voyage to Italy”,; it is one of the most beautiful pages dedicated. The english painter Turner painted the bridge immersed in a fantastic atmosphere. Stendal was impressioned by “ The Walk”, the nowadays avenue Matteotti which goes from the historique centre and continues to the green hills. During the same years, the german erudite Gregorious defined the fortress as one of the most beautiful monuments of the medieval era and the cathedral the best ornament of Spoleto along with Saint Pietro, a lombardian stunnig church. Since ancient times, poets and writers have been influenced by the charm of Clitunno sources and the closely small temples of V century, only few kilometres far from Spoleto. The little temple “Il Tempietto” and the paleochristian basilica of Saint Salvatore are among the most ancient of the city.

After the second World war, Spoleto has become an attractive center from a cultural point of view: infact, it hosts the sperimental lyric theatre, the “Two wolds festival”, and the Early middle ages studies. The festival of the two Worlds, also known as Spoleto festival of 2009, is celebrated every year from the end of june until mid-july. It is a global attraction of great interest!

Spoleto, not the Rocca that looks at you
ghibelline from your enemy Guelph,
nor the greatness of Theodoric
that thoughtfully lingers there in the evening
not the Borgia from which it seems that you think
suddenly of the ancient triumph,
nor from the vast aqueduct to the high street
Roman sign and Lombard footprint
I try, but in the silence of the Assumption
the ark of Fra Filippo who gives marble
pale exhales spirits of love
while in the wall pious his deceased
Virgin, released from death, parm
i fold on the chest of the Announcer.

Gabriele D’ Annunzio in his “City of the Silence”

"HOW NICE TO FEEL PAMPERED!"

ll has been fantastic!When we arrived there was the fairplace and the friendliness of the owners to welcome us after seven hours of tiring trip! The apartment was comfortable and breakfast was very healty, genuine and pentiful. I would like to go back!